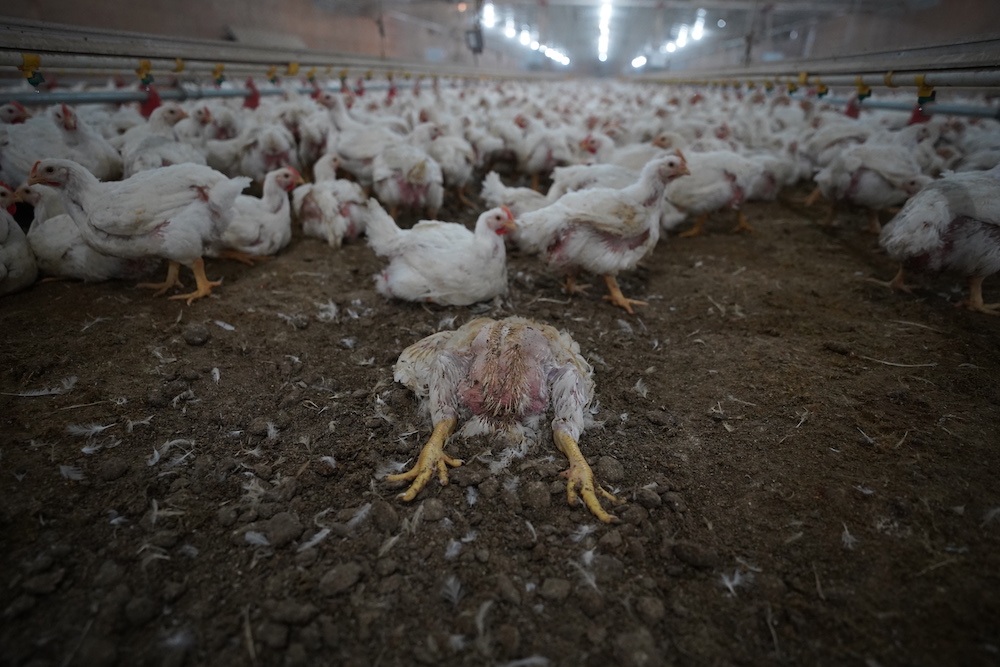 Foster Farms is the largest poultry producer in California and it is rapidly expanding, despite DxE’s reports of criminal animal cruelty at the company's chicken and turkey farms and its chicken slaughterhouse in Livingston.

Help us expose Foster Farms, including during the #FosterFarmsRescueTrial this March. Read on to find out more.

In September 2021, DxE released hidden camera footage from inside Foster Farms' Livingston slaughterhouse showing chickens routinely missing the stun bath and a device designed to cut their necks, leaving it to workers to identify conscious birds before their evisceration, at a speed of 140 birds per minute. Sick and injured birds are thrown to the ground and sometimes buried beneath other chickens. This conduct is a violation of the company's policy, its American Humane animal welfare certification, and California animal cruelty laws, but state and local authorities have ignored our formal complaints against the company.

A Bold Blockade and Open Rescue

The same day that DxE released this footage, a dozen activists staged a blockade at the entrance to the slaughterhouse.

While a truck was stopped from entering the slaughterhouse, DxE activists Alexandra Paul and Alicia Santurio ran up to the truck and pulled two chickens out of the cages. They carried them away to safety, got them medical care, and named them Ethan and Jax. Watch the rescue here:

Ethan was very sick and sadly, he didn't make it, but Jax is thriving at a sanctuary. You can see more of Jax's story in the video below:

Alexandra and Alicia are facing theft charges for rescuing Ethan and Jax. Their trial is set for March 7, 2023 in Merced, California, and it is expected to last four days. You can find out more about their case and other "Right to Rescue" cases at RightToRescue.com.

Visit RightToRescue.com and sign the petition to support animal rescuers facing prosecution in the #FosterFarmsTrial and other open rescue trials.

This trial is an opportunity to bring attention to criminal activity within the state-funded slaughter industry and to let a jury decide where they stand on the issue.

Foster Farms received a combined total of $6.5 million from the state and local government for expansion at its Livingston slaughterhouse, money which has enabled continued animal cruelty, environmental, and workers’ rights violations. The Livingston slaughterhouse was the site of a COVID-19 outbreak that infected over 400 workers and killed at least 8 as of September 2020. Cal OSHA fined the plant nearly $200,000 for 14 total COVID-19 violations, including failure to timely report work-related fatalities.

Foster Farms also faces legal action over its vast water usage; it is the largest consumer of water in the city of Livingston, using as much as four million gallons of drinkable water per day. Meanwhile, residents in rural Livingston, who are predominantly Latino and disproportionately low-income, face water shortages.

We hope to shine a light Foster Farms' violent and destructive behavior during the #FosterFarmsRescueTrial -- and we need your help.

Three Ways You Can Help Us Expose Foster Farms

1. Follow the Foster Farms Trial Twitter account for updates about the case and to retweet our posts so they reach more people. When you retweet, please use the hashtags #FosterFarmsRescueTrial and/or #RightToRescue.

2. Attend the trial on March 7 in Merced, CA to help us pack the courtroom and show the judge and jury that the public supports animal rescue.

3. Contact Merced County District Attorney Nicole Silveira and ask her to prosecute Foster Farms for animal cruelty. You can call the DA's office at: (209) 385-7381 or email the office at: Dainfo@co.merced.ca.us.