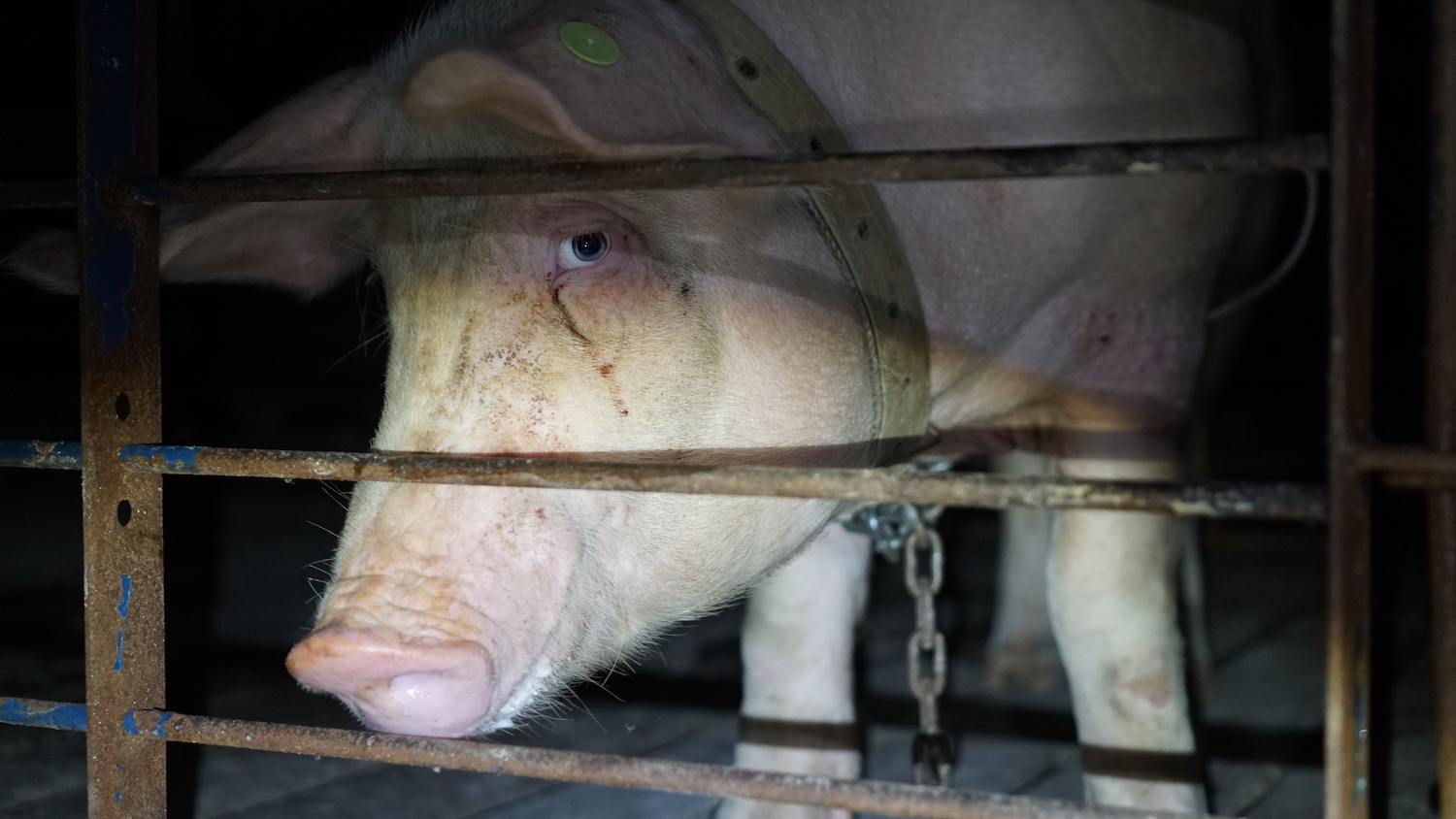 Smithfield Foods is the largest “pork” producer in the world, and DxE is on a mission to expose the company's abuses to the world. In October 2022, two DxE activists went on trial for documenting the conditions at Smithfield's Circle Four Farms and rescuing two dying piglets, Lily and Lizzie. The trial ended with a groundbreaking verdict where the 8-person jury unanimously acquitted the animal rescuers. You can read more about this win against Smithfield in this article from The New York Times.

Our fight against Smithfield isn't over. Although the company did not succeed at imprisoning these whistleblowers, it continues to commit crimes against animals, workers, and our planet with no accountability.

Here are 5 facts you should know about this dangerous corporation:

1. Let's start with the obvious. Smithfield Foods tortures animals. DxE investigations into Smithfield facilities in Utah and North Carolina in 2017 and 2018 found mother pigs confined in metal gestation crates barely bigger than their bodies. These crates are roughly 2 feet wide by 7 feet long. Pigs cannot even turn around inside these cages. The pigs are forcibly impregnated over and over again. They are forced to sleep in the same place that they urinate and defecate. Imagine going through that kind of physical and mental torture -- all while pregnant, only to have your babies stolen from you at the end and to be impregnated once again.

The baby pigs are mutilated without anesthetics. They are castrated and have their tails cut off. And when they get sick in the filthy, crowded conditions, infectious diseases go untreated (and make their way into the food supply).

‍
Smithfield puts millions of pigs through this torture every year. The company slaughters one fourth of all the pigs killed for food in the United States. A single Smithfield slaughterhouse in Tar Heel, North Carolina kills 32,000 pigs a day.
‍

2. Smithfield is spraying pig manure into poor communities. Smithfield facilities in North Carolina are spraying out toxic manure into the neighborhoods near its farms. Locals have suffered respiratory illnesses and other diseases, in addition to the persistent odor which is so unbearable some residents have said they avoid even going outside. In North Carolina, around 500 plaintiffs in 29 cases have sued Smithfield Foods. Fortunately, Smithfield continues losing lawsuits brought by community members. The victims are predominantly Black and poor, as those who can afford to move away from these places very much tend to do so. This is environmental racism.

DxE gave Smithfield's CEO a taste of his own medicine when we sprayed real pig feces (collected from a Smithfield farm) at his home in Richmond, Virginia.

‍
Smithfield's history of pollution goes back decades. In 1978, Virginia's State Water Control Board sought civil penalties against Smithfield for failing to make improvements to mitigate wastewater discharge into the Pagan River. The case ended with a settlement that included a $25,000 payment. In 1985, in another Virginia case, a federal judge fined a Smithfield subsidiary around $1.2 million in a Clean Water Act suit filed by the Chesapeake Bay Foundation.

But Smithfield still didn’t learn its lesson. And in 1997, Smithfield was fined 12.6 million dollars, the largest clean water act fine in history, for once again discharging illegal levels of pollutants from their slaughterhouse into the Pagan River. Another ruling found Smithfield had falsified documents and destroyed water quality records.‍
‍

3. Smithfield was caught in a human slavery scandal. Really. From 2005-2007, workers from Thailand, who had been lied to about prosperous employment opportunities, had their passports seized and were forced to work for little-to-no pay. Meanwhile, they were threatened that their families back home would face financial ruin and worse if they didn’t comply. It’s one of the largest instances of human trafficking in U.S. history.
‍

4. In April 2020 Smithfield became the “Largest Coronavirus Hotbed In United States.” As of April 16, 2020, a Smithfield Foods meatpacking plant in Sioux Falls, South Dakota was the largest coronavirus hotspot in the United States, with nearly 600 employees and 135 close contacts testing positive for COVID-19. At another Smithfield plant in Cudahy, Wisconsin, workers spoke out about the company pressuring them to work elbow to elbow without masks. One plant worker with asthma said that when he asked for a mask, an official at the company declined his request because if he was provided one, Smithfield would “have to do it for everyone else.” Smithfield has 54,000 employees worldwide, many of whom are immigrants or low-income community members without many other options for work. Their lives are now being put at risk daily all because Smithfield values profits over safety.

And if that wasn't bad enough, Smithfield is blaming the outbreaks on the "living circumstances" of the "large immigrant population," as if it’s the fault of undocumented workers struggling to provide for their families. Clearly, they don't have the option to live in mansions like Smithfield executives do.
‍

5. Smithfield is brewing the next pandemic. DxE’s investigations of Smithfield have found piglets suffering from antibiotic-resistant staph infections, evidence of coronaviruses among the pigs, and all the perfect conditions for spreading disease: filth, open wounds, and extreme crowding. In a 2020 investigation, DxE trailed a slaughter truck over 700 miles from a Smithfield factory farm in the Utah desert to a newly constructed California slaughterhouse, documenting how factory farm-borne diseases spread around the country. Dead, pathogen-laden pigs were left outside the slaughterhouse where wild animals were seen feeding upon them. This presents a proven risk of zoonotic disease transmission, with pigs, birds and even feral cats potentially infecting humans.

The investigation also documented workers cutting away infected flesh from slaughtered pigs so they could be sold as healthy, with the removed, infected flesh left outside in open bins. The diseases brewing inside Smithfield’s farms are being spread around the country, and everyone -- animals, workers, and all life on this planet -- is in danger.

So are you ready to help us shut them down?

Here are three ways you can take action today against Smithfield's cruelty.

Investigators filmed with 360-degree cameras so you can see inside a Smithfield Foods farm in immersive, virtual reality. Even without a VR headset, you can click and scroll on the YouTube video to see different angles of the facility. Help us expose the reality of factory pig farming by sharing this video with your network.

2. Contact Costco and ask them to cut ties with Smithfield Foods.

Costco continues to sell "pork" from Smithfield Foods despite repeated investigations exposing animal cruelty at Smithfield that violates Costco's own animal welfare policy. Costco previously claimed to give animals Five Freedoms including: freedom from fear, freedom from discomfort (right environment, shelter and place to rest), freedom from thirst and hunger, freedom to exhibit natural behavior, and freedom of pain and suffering. Following DxE's groundbreaking Smithfield Trial win in October 2022, people across the country protested at Costco stores asking the company to drop Smithfield Foods as a supplier. Two months later, in December 2022, Costco removed the "Five Freedoms" from its animal welfare policy. Instead of dropping cruel suppliers like Smithfield Foods, Costco is just lowering its values. This is not an acceptable response. We need your help to put the pressure on Costco to cut ties with Smithfield.

You can email Costco CEO Craig Jelinek at cjelinek@costco.com. Here is a sample letter that you can use as a guide.

Phone numbers and emails are provided for FSIS leadership and regional directors on the USDA website here.