Imperial Dust: How California's Subsidized Slaughter is Stealing Our Future 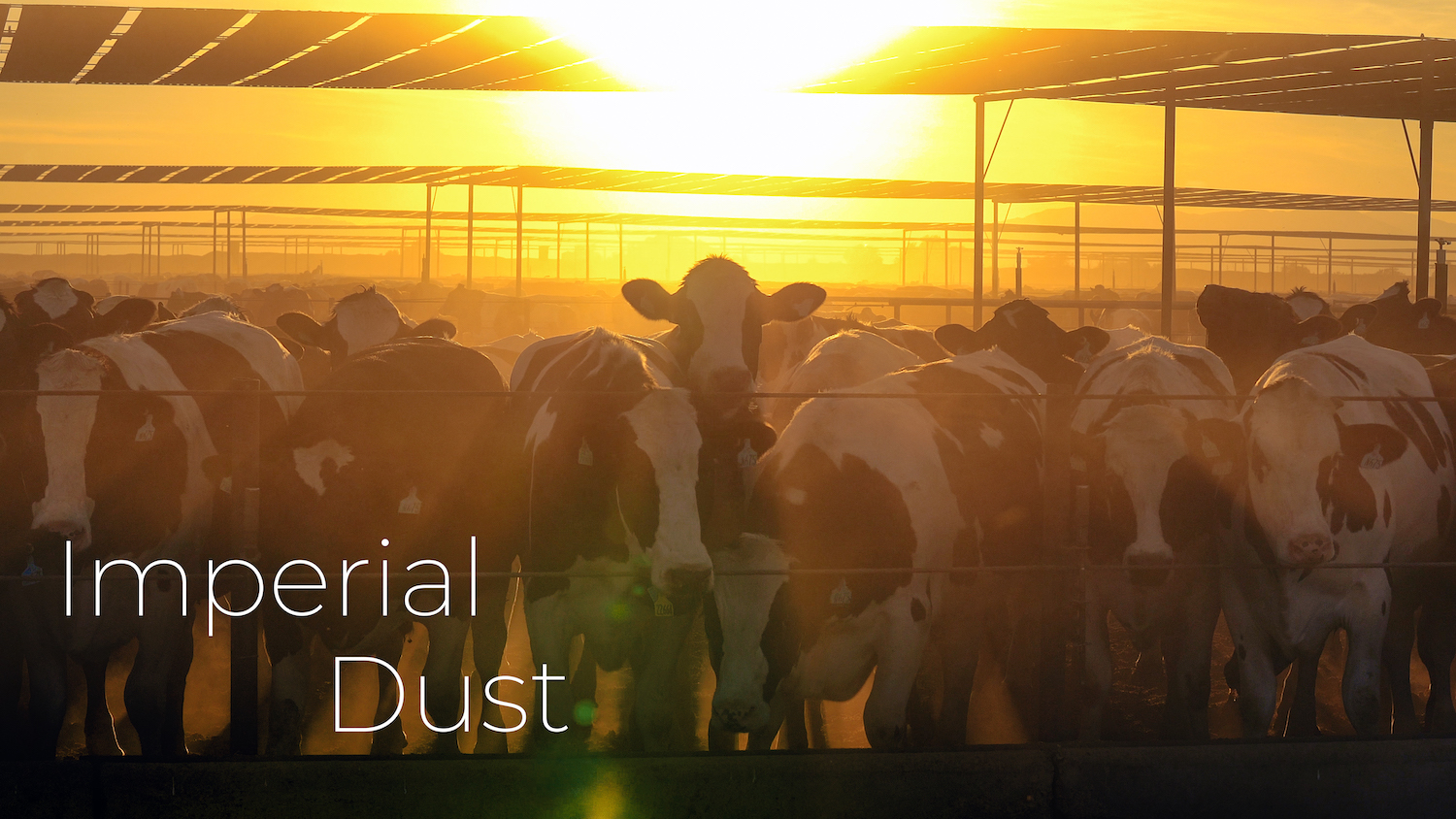 Sign to support a moratorium on factory farming in California

California is the highest-producing agricultural state in the nation. California's farms and ranches received $49.1 billion in cash receipts for their output in 2020, with cattle, calves, and dairy products as some of the top agricultural commodities. Animal agriculture is well-known as one of the largest contributors to climate change, making up more than a third of methane emissions in the US and using so much water that it is significantly diminishing the flow of major US rivers. And yet, instead of working to address the harms caused by this industry, the Governor’s Office of Business and Economic Development is actively funding the construction and expansion of factory farms and slaughterhouses throughout the state.

A new investigation into a major Costco beef supplier in California’s Imperial Valley is showing the true cost of this government-subsidized expansion -- for animals and all of us who rely on the same precious natural resources.

The One World Beef company, also operating as Brandt Beef, has one of the largest cow feedlots on the West Coast, spanning 730 acres and confining as many as 150,000 cows at a time. Two-thirds of these cows are slaughtered by Brandt to supply Costco’s “Kirkland Signature” product line - around 86 million pounds of beef each year, making up an estimated 25% of all beef sold by the retail giant.

Over the course of a 6-month investigation at the Brandt Beef slaughterhouse in Brawley, California, anonymous whistleblowers recorded criminal animal cruelty, including improper stunning, cutting into the necks of conscious cows, pulling cows with rope, the use of cattle prods to shock “downed” cows, as well as prodding cows who were too crowded to move and countless numbers of animals with unexplained bleeding injuries and lameness.

During each step in the process of a Brandt cow’s life and death, water is wasted, land is degraded and polluted, dangerous emissions are generated, workers are exploited and traumatized, and the cows themselves are subjected to abuse.

One World Beef opened the Brandt Beef slaughterhouse in Brawley, California in 2016, with the assistance of over $6 million from the state of California. Killing over 300,000 cows per year, it is one of the largest slaughterhouses in the state. The facility had operated in the past under two different companies, and the 2016 reopening faced considerable opposition from the local community, which is over 85% latino. In December 2020, Cal/OSHA fined One World Beef Packers for inadequate safety precautions and failing to report a COVID-19-related worker fatality. The $23,000 fine was a small fraction of the amount OWB received in state funding that same year.

Over the course of a multi-month investigation, anonymous whistleblowers collected data and footage using hidden cameras throughout the Brawley slaughterhouse. From loading ramps to the kill floor, investigators documented the entire process to which Brandt cows are subjected.

Hidden camera footage recorded inside One World Beef in Brawley, California shows improperly-stunned, still-conscious cows raised onto the slaughter line upside down via chains shackled to their legs, before shaking loose and falling to the floor, highlighting what investigators say is a climate of lax enforcement in an industry rife with criminal abuse.

The footage shows company and/or USDA inspectors watching over a worker, who rightfully checks the animals for signs of sensibility after stunning them, in accordance with the Humane Methods of Slaughter Act. But once the inspectors step away, the worker immediately stops checking the animals for sensibility after the bolt-gun shot, resulting in still-conscious cows proceeding through the slaughter process.

Other footage inside the facility shows additional violations of the Humane Methods of Slaughter Act via the routine misuse of an electric prod, including on “downed" cows (animals physically immobilized due to illness and/or injury) as well as cows waiting in a line to slaughter, with no physical space available to move forward. These violations constitute criminal animal cruelty under federal law.

238,000 gallons of water per day is consumed and polluted by Brandt’s slaughterhouse alone. The Alamo river, one of only two major waterways in Imperial County, runs directly beside the Brandt Cattle feedlot northwest of Calipatria, and it is polluted by manure dust from the feedlot. The company uses an estimated 2 million gallons of water just to control the amount of dust in the air at its feedlot. In the Imperial Valley, the rate of asthma-related emergency room visits and hospitalizations for children is double the California state average.

The Lives of Brandt Cows

Brandt uses exclusively male holstein calves, considered a byproduct of the dairy industry because they don’t produce milk. Male calves from dairy farms across the state are separated from their mothers and sisters at birth, and trucked to massive industrial calf raising operations like Grimmius Cattle in Tulare County.

At Grimmus, as is standard in calf raising operations, the typical crate stall is 2.5 x 4.5 ft. As calves approach 6 weeks old, they are barely able to turn around and lay down. Hutches are constructed side-by-side in long rows on top of concrete latrines which funnel into manure lagoons. This means, instead of bedding, the bottom of calf crates are made of open slats, often covered in diarrhea. The calves are crated for at least 6 weeks, drinking 2 gallons of “waste” milk or formula per day while being weaned onto a “calf starter” (a bucket full of flaked corn and soybean meal) before being moved to the "grow yard."

On the Brandt feedlot, cows are kept in stationary pens, never allowed to leave or see pasture. The concentration of cows in a confined environment leads to the trampling and compaction of manure and dirt, creating immense amounts of dust. This dust is remediated by the use of sprinklers, consuming an estimated 2.3 million gallons of water per day. The average Brandt cow drinks over 7,000 gallons of water over their lifetime, averaging around 3 million more gallons consumed per day at the feedlot.

But the largest amount of water consumed by Brandt is the water used to grow their feed. Imperial Valley’s alfalfa growers, such as Brandt, consume more water than any other crop, even though much of Imperial Valley alfalfa is exported overseas and the United States relies on the Imperial Valley to grow 80% of its vegetables during winter. Each steer eats over 6,000 pounds of feed per year. Even at only 10% alfalfa (a minimum amount of forage necessary for rumen health in cattle), across 150,000 individuals, Brandt consumes another 43 million gallons of Imperial Valley water via alfalfa irrigation every day.

This means the Brandt operation is responsible for consuming at least 48.5 million gallons of California’s allotment of Colorado River water every day. Meanwhile, Californians are being asked to change their personal habits to use only 55 gallons per day.

Along with the immense amount of water used to grow the animals’ food, there are other negative effects of this unnatural diet. Cows who eat an industrial, grain-based diet often suffer from acidosis, a painful buildup of acid in their bodily fluids.

What Must Be Done

Instead of funding the expansion of factory farms and slaughterhouses, California should be halting this destructive expansion.

Bold, decisive action is needed to address the routine abuses of the animal agriculture industry. That’s why DxE launched the No More Factory Farms campaign, calling on California leaders to enact a moratorium prohibiting the construction and expansion of factory farms and slaughterhouses in the state.

In response to the No More Factory Farms coalition campaign, in February 2022, California Assemblymember Adrin Nazarian introduced Assembly Bill 2764 to enact a moratorium on the construction and expansion of commercial animal feeding operations and slaughterhouses in California, along with joint author Assemblymember Alex Lee. However, the bill was reduced to a study and ultimately died without a hearing following pressure from the agriculture committee. We must keep taking direct action to demand an end to this destructive industry in California and around the world.

California has passed moratoriums on evictions, debt repayments, offshore drilling, and even on the death penalty. Now is the right time for a moratorium on factory farms.